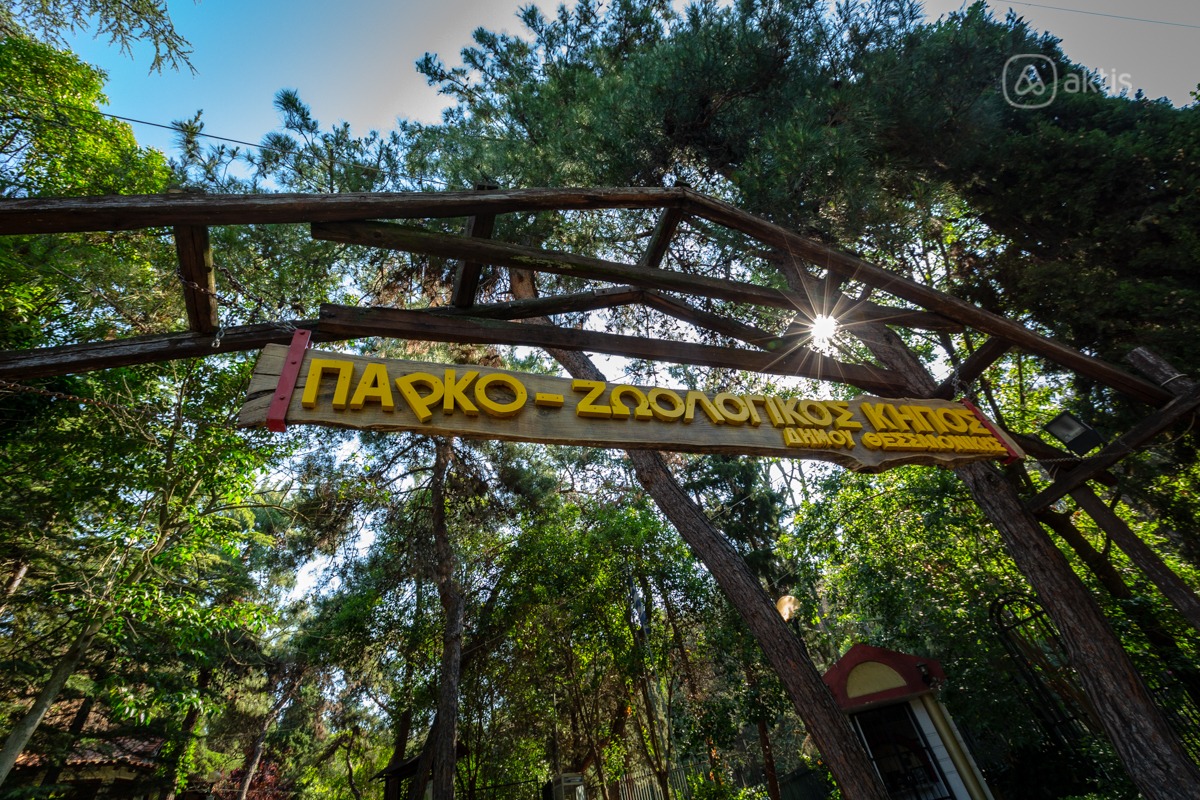 The magnificent city of Thessaloniki is simply full of numerous historical and architectural sites, which are able to obtain the heart of even the most experienced traveler. But is there a place where you can go with the children who are absolutely not interested in walking along ancient streets and antique structures? Yes, there is — make a nature trip! In the northern capital of Greece, there is a place where you can combine the repose on the fresh air with the opportunity to communicate with animals — it is the Thessaloniki Zoo.

Some facts about the zoo

Located in the upper town, on the Kedrinou hill in the area called “Hilia Dentra” (that means “a thousand of trees”), the zoological park of the northern capital of Greece is surrounded by a dense mixed woodland and appears to be a wonderful place for relaxing in nature’s lap even in the hottest summer days. Amazing natural landscape, a sweeping view of the central area of Thessaloniki, amusing and very sociable inhabitants — both children and adults will definitely like this place.

Beautiful tall green trees, ponds, small streams, bridges and paved paths make a splendid scenery for the photos, which are successful here from every conceivable angle. Having sat cozily for a picnic on the fancy meadow, you can watch the equanimous inhabitants of the zoo who are lazily strolling through the territory. The thing is that the territory is organized in such a way that the animals would not feel imprisoned and could move around the allotted area without any restrictions. In order not to hurt the forest and the environment, all the buildings in the zoo are made of stone and wood, and the enclosures are arranged with the most natural environment conditions for their inhabitants.

The Thessaloniki zoo was opened in 1987 and for a long time it was a place, where you could see a wide variety of the representatives of the flora and fauna of Greece. Just some time ago, it was possible to watch here the bears, wolves and wild cats, but since 2015 according to the decision of the municipal council, these animals were transferred to the conservation centers, located in the mountains on the North of Greece. At the same time, it was decided to transform the zoo into an ecological park. Such changes were based on the three-year-long study of the “European Network of Organizations for the Elimination of Wildlife Captivity” which indicated that the zoos of almost all the European countries are not able to provide sustainable living conditions approximate to the environment of the wild nature.

Nowadays, the zoo of Thessaloniki can rather be called a park where the animals are kept in conditions that are as close to the natural ones as it is possible. The original idea of reorganizing of the zoo into a farm pet garden appeared to be difficult for being realized — the zoological garden is located in the forest and its character cannot be radically changed. Therefore, on the territory of the zoo not only farm animal live but also some wild mammals, such as deer, roe deer, fallow deer, wild sheep, some species of birds and pond turtles. Among the usual pets you can meet goats, sheep, different fowl — chickens, geese, ducks, turkeys, there are also the enclosures with unusual bird species. Peacocks, ducks and geese are freely walking around the territory of the park, and on the swards rabbits are jumping that really fascinates small children.

A visit to the Thessaloniki Zoo is like walking through a mountain forest, where you can enjoy nature and at the same time watch the life of its inhabitants. There is a pond near the entrance to the park, where numerous ducks, geese, pelicans and other waterfowl live. Various paths and bridges complement the already picturesque area, and in some places of the zoo the tables, benches and alcoves are set up, where you can sit for a rest or have a snack during the walk.

The whole zoo is located on the hill that is why the walk means mainly going up. But is doesn’t create inconvenience because there are landscaped paths everywhere and the bridges are thrown over the small ponds and streams, which make the scenery more wonderful and vivid. The children will definitely like to feed the animals — numerous goats, sheep, roe deer and donkeys will be happy to treat themselves with apples, carrots or even the grass, which you can pull right near their fences.

In 1994 a Museum of Natural history was opened by the zoo, where you can see stuffed animals and skeletons of different animals, learn their eating habits and natural habitat. There are big collections of butterflies and stones from the mouth of the Axious river in the museum.

The zoo of Thessaloniki is located on the Kedrinou hill, in the area, which the locals call “the Upper town”. You can get here by the bus No.24 — the bus stop is right next to the zoo entrance. Those who prefer not to depend on the public transport schedule (the bus runs approximately once an hour) can take a taxi, book a transfer or rent a car. Not far from the entrance there is a car parking for cars of the visitors of the zoo.