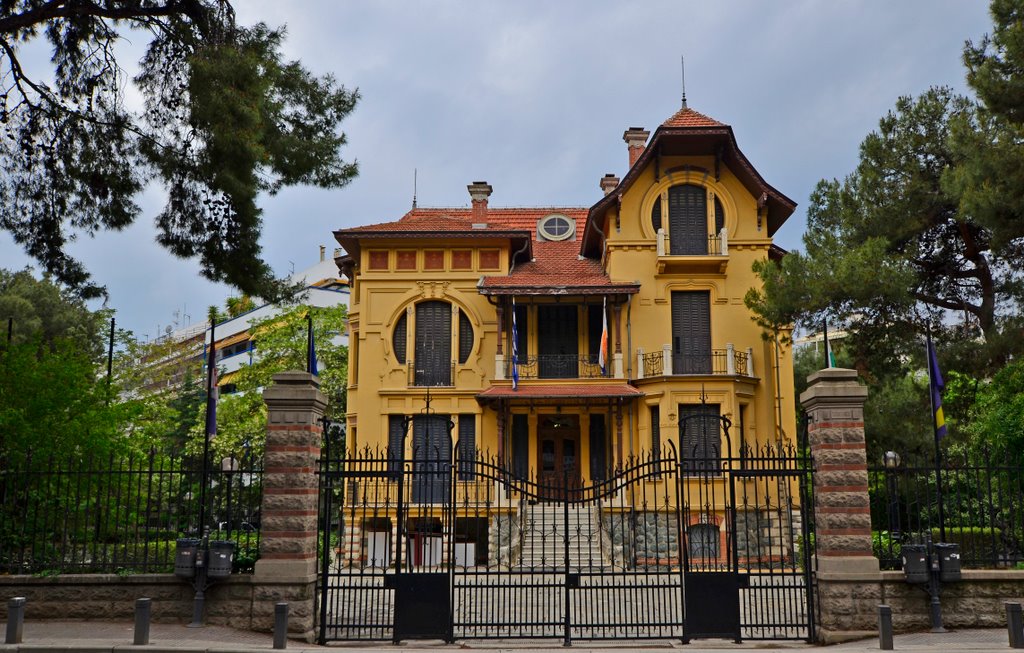 A stroll around Thessaloniki is like an extended trip through various epochs. Greece has it all; the heritage of the Roman, Byzantine, European, and Turkish culture. The villas, which appeared in Thessaloniki at the turn of the XIX-XX centuries, had soon become the architectural decoration of the city alongside its ancient monuments. Villa Bianca is one of these buildings.

The history of Casa Bianca Thessaloniki

Villa Bianca (also known as Casa Bianca) is the creature of the prominent Italian architect Pierro Arrigoni. The building construction lasted from 1911 up to 1913. Dino Fernandez Diaz, a rich tradesman, was its owner. He comes from the family of the Sephardic Jews. Some people say that the house bears the name of his wife, Blanche (Bianca) Meyer.  The villa was his wedding present to her.

Like any other old house, Villa Bianca can “tell” a story of people who were its residents. In our case, it is the story about the life of the Fernandez family. This family name became widely known when Aline, the daughter of Dino Fernandez, entered into a relationship with Spyros Alibertis, the captain of the 7th squadron of the Greek Army. Their love became a true convulsion for the conservative society of those times. Aline had to be baptized to get married to her beloved, which was nonsense for her family.

The relationship of the Christian Alibertis and the Jewish Fernandez had soon caused a scandal in the society. The press was riddled with sensational headlines. Although the situation was not favorable for the beloved, Spyros and Aline eloped to Athens. In 1914, they got married there. Later, when the dust had settled, the couple came back to Thessaloniki.

The chatelaine of Villa Bianca, Blanche Meyer, died in 1934, in Paris. In 1941, amid World War II, the Fernandez family members were forced to flee the city. After that, the Italians occupied it. The building served as the residence for the Italian Ambassador in Thessaloniki. Later, it was occupied by the Germans. In the following years, one planned to wreck this building several times. However, in 1976 Villa Bianca obtained the status of an architectural landmark.

In 1990, Casa Blanca went under the control of the country and the Municipality of Thessaloniki. One took all the required measures and held the works on the building restoration to preserve its peculiar character. These works were brought to the end in 1997. Modern Villa Bianca houses the Municipal Art Gallery of Thessaloniki. The gallery was formerly found in the house of Villa Mordoch up till 2013. After that, it moved to its current residence.

The architectural design of Villa Bianca is one of the best examples of Thessaloniki eclectic architecture. The house perfectly combines various styles with the features of the Renaissance, modern, and Barocco. The picturesque balconies and open areas are among the distinguishing features of the building. The Casa Bianca house comprises the basement, the socle-floor, the first floor, and the second floor with the cock-loft. At the times, when the Fernandez family owned the house, its first floor included bedrooms, a parlor, a dining room, a living room, a kitchen, a bathroom, and a utility room. The second floor was used by personnel for living. In the 60s, it was used as the kindergarten.

Casa Bianca sits on the junction of the streets of Vasilissi-Olgas and Themistokli Sofouli. To get here, you can catch the bus №33 at Aristotelous Square. Enjoy the ride till the stop Agios Eleftherios (Άγιος Ελευθέριος). Get off the bus, and take a 450-meter walk to Villa Bianca. Another way to access the building is to take a taxi at Thessaloniki city center. The cost of a trip by taxi to Villa Bianca is about €4-6.