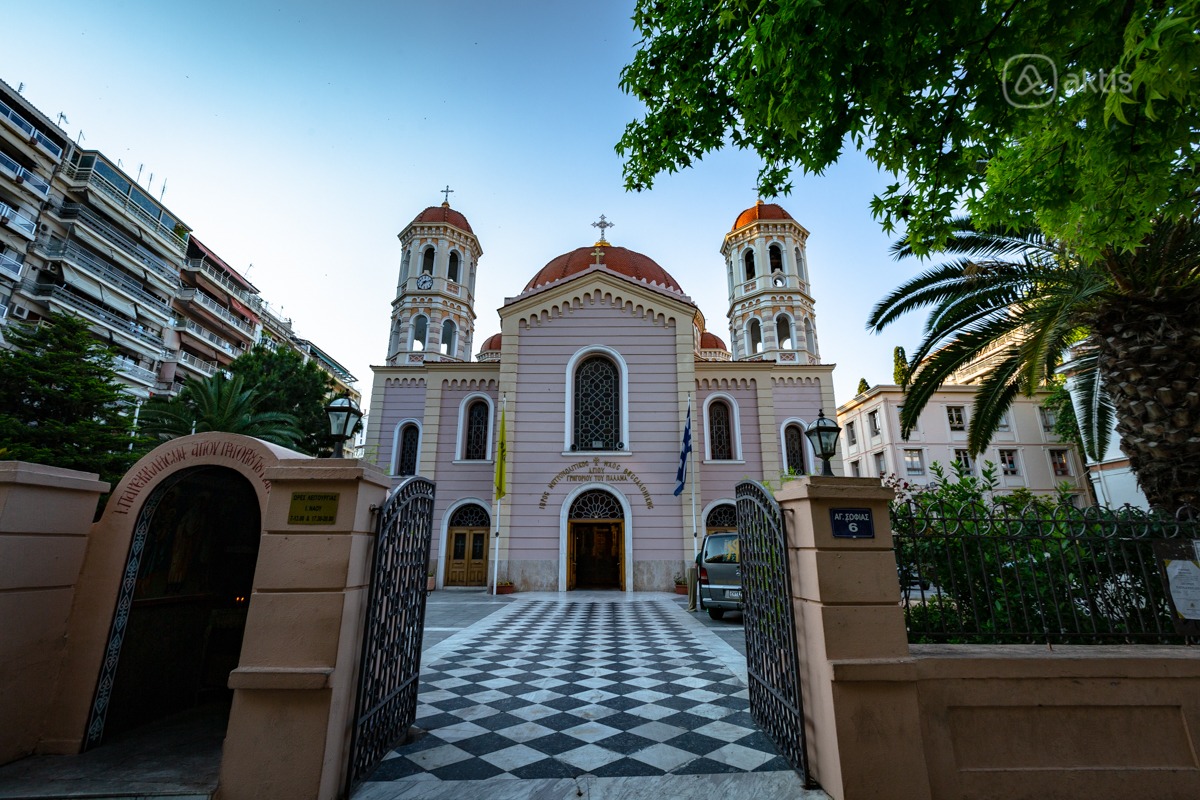 Thessaloniki is one of the most important centers of Orthodox pilgrimage in Greece. The quantity of churches, cathedrals and monasteries located in this city is numbered in the tens. One of the most interesting temples to visit is the church of Saint Gregory Palamas.

The first church at the place of location of the modern cathedral appeared as far ago as in the XIII century. Then the temple was a three-aisled basilica. At the end of the XVI century, it served as a metropolitan cathedral. In 1890, the Church of Gregory Palamas was destroyed after a large fire. Its restoration was completed in 1914 using design-projects of architect Ernst Ziller and the best professionals of that time. The construction took 24 years, and it was the first domed church built in Thessaloniki, when the city was occupied by the Turkish.

The temple was named after the archbishop of Thessaloniki Gregory Palamas, whose biography is very interesting. Born in a family of aristocrats, Palama spent 20 years of his life at the court of emperor Andronikos II, having been taught by the best teachers and showing promise for a brilliant career.

But Gregory Palama's life choice was quite different. Having left the palace, he went out to the mount Athos. Here he studied theology and became a monk. Escaping from the Turks, Palama went to Thessaloniki, where he entered the church. From that place, he went to the outskirts of Veria to organize a community of hermits. He had been an archbishop from 1350 until his death in 1359. As long as during his lifetime, Gregory Palamas was famous for the gift of healing. A few years after his death, the former archbishop of Thessaloniki was canonized and nowadays he is venerated as one of the greatest saints along with Saint Demetrius.

In 1978, after the earthquake, the works were began to restore the frescoes of the temple. At that time, a secret crypt was found under the altar, which was possibly built during the struggle for Macedonia (1904-1908). The crypt is opened as a historical heritage of the temple — a museum exhibition is equipped in it.

The relics of Gregory Palamas are kept in the cathedral — they rest in a silver reliquary. After the death of the saint, they were placed in the Church of Saint Sophia. When the Turks had entered the city, the temple was turned into a mosque, and the relics were temporarily transferred to the Vlatadon monastery. Since 1890 the relics have been stored in the St. Gregory Palamas Church in Thessaloniki. During the services, the reliquary with the relics is taken to the center of the cathedral for veneration.

The look of the church of Saint Gregory Palamas in Thessaloniki is the best illustration of how Byzantine architecture can be combined with other styles. The Cathedral has a cruciform shape, like many other Orthodox churches in Greece. In addition to the Byzantine architectural elements there are neo-Roman and neoclassical features in the appearance of the temple. It is connected with the restoration of the cathedral after the destruction.

When a new temple had been constructed on the site of the destroyed one, the best masters were involved for the creation of the interior apparel. Today, inside the temple of Gregory Palamas you can see magnificent frescoes with biblical themes, mosaic floors and stained glass windows. The relics of saint Gregory Palamas are situated to the left of the entrance.

The Saint Gregory Palamas Holy Metropolitan church is located in the centre of Thessaloniki, on the busy street of Proxenou Koromila. It can be reached on foot from Aristotelous square just in 5 minutes. Standing with your face to the sea, turn left and walk straight ahead for about 400 m.