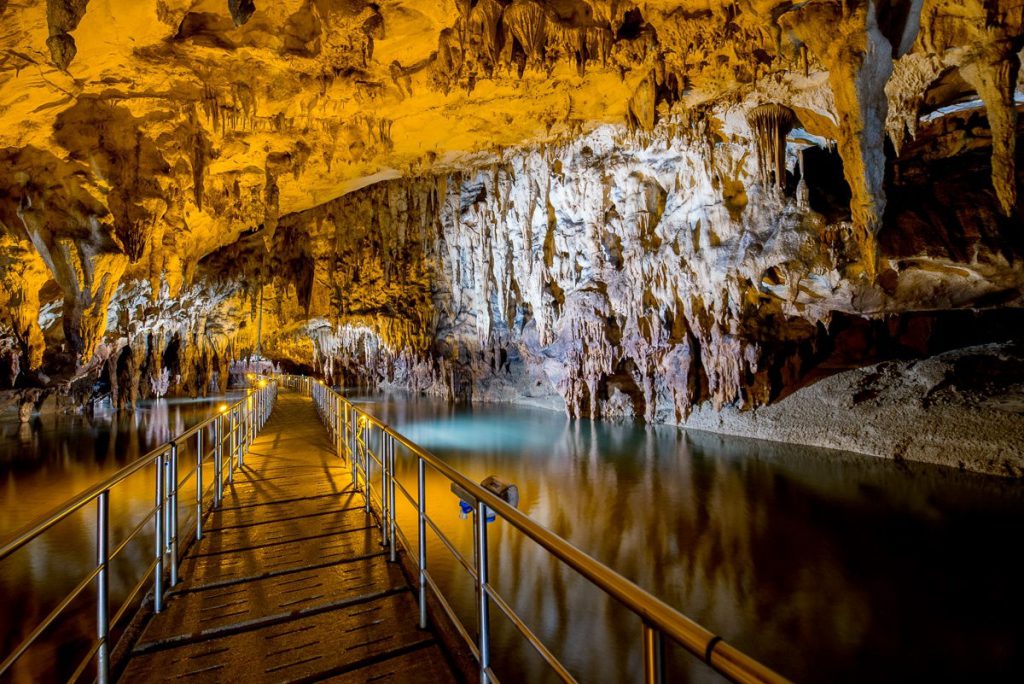 Petralona cave is something more important for Greece than an ordinary place of interest. It is a natural wonder and a site where human remains of the most ancient European man were discovered. The impressive age of the discovery simply doesn’t allow you to pass by if you are at vacation in Halkidiki.

Petralona cave was occasionally discovered by a local resident Philip Chadzaridis in 1959. But it became world-known only one year later, when another local inhabitant Christos Sarijannidis found an ancient skull in this cave. The value of the trove and its uniqueness was appreciated immediately when the works were started few years later. The archeologists ascertained that the remains belong to the most ancient man in Europe and their age is at least 700 000 years. According to another version they are 200 000 years.

In addition to the skull Petralona cave gave some more discoveries among which are tools of stone and bone, fossils of dozens of ancient animals species (rodents, birds, lions, hyenas, bears and other), traces of primitive fireplace. All of this allowed Petralona to become the richest cave in Europe in terms of the number of ancient discoveries. But even now, the cave that was named “the Parthenon of paleontology” and that was investigated by the greatest scientists of our time is not still fully explored.

Inside the cave is divided into several halls and covered with fantastic formations of stalactites and stalagmites. You can see them after you pass through a special tunnel. It is a really fascinating site — Petralona cave impresses even those people who had visited another caves before. One of the halls of the cave is imitating the dwelling of the ancient man who was lighting a fire. It is a reconstruction of the process of cooking on the fire. Along the lanes in Petralona cave, the niches are equipped, where the bones and other troves are kept.

Next to the Petralona cave, there is an Anthropological museum. In its collections, there are more than 2500 artifacts not only from the peninsula of Halkidiki but from other regions of Greece as well. In the museum, you can see those tools and fossils of huge mammals, which were found in Petralona cave, as well as an exact copy of the skull. There are statues of animals who inhabited these places thousands of years ago.

The cave is divided into six halls, which are connected by galleries and narrow tunnels. Each of the halls has its unique name, for example: “Large Hall”, “Room of Harmony”, “Room of the White Coral”. Over the hanging bridges, there are pointers with numbers. When you buy a ticket, ask about the time of the nearest excursion and join it. Together with the guide, you won’t get lost and will have a nice chance to learn many interesting facts about the history of the cave. Note that the excursions are held only in Greek and English languages. But in front of the entrance to the cave there are information boards in Russian — you can have a look at them in advance.

Petralona cave is located on one of the slopes of Katsika mountain, 1.5 kilometres from the village of Petralona and 50 kilometres from Thessaloniki. You can get to the bottom of the mountain by can and then leave the car by the barrier and continue the way to the mountain on foot. There is a small train, which runs from the parking area (for a fee). But the most of the visitors prefer not to wait for it.

If you get from Thessaloniki or the resorts of Halkidiki peninsula by public transport, you need to reach first the K.T.E.L.Halkidiki bus station. From this place, there is a bus to the village Eleohoria, which is situated 6 kilometres from the cave. You can take a taxi from the village to Petralona for about 7-8 euros.

What to wear: In Petralona cave the temperature is constantly low — it doesn’t rise over 16 degrees. Considering all this, it is better to wear a coat or a warm jacket. It is recommended to choose comfortable and stable shoes (sport shoes, boots).

What to take: money for buying souvenirs, tickets and lunch (near the cave there is a cafe), warm clothes and camera. It is not allowed to take photos in the cave, but you can do it in the museum.

Pay attention that Petralona cave has been closed for renovation since 2019.