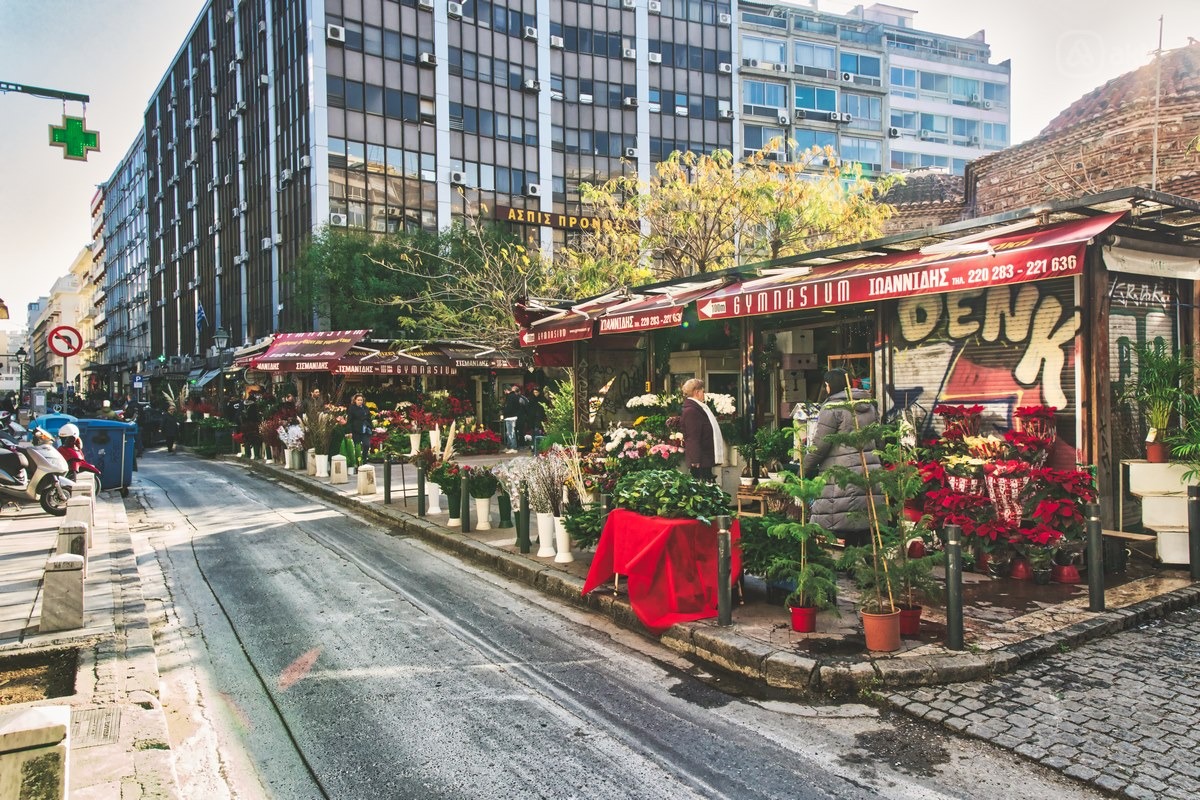 The Northern capital of Greece — Thessaloniki — is a truly multifarious city, where every quarter and every street carefully store fragments of history, which goes back more than two thousand years. A walk through different parts of the city is a great opportunity to plunge into the atmosphere of several eras feel, the unique flavor of Thessaloniki and leave a piece of your soul here forever.

In the heart of Thessaloniki, near the port and the area of restaurants, cafes and clubs, which is called Ladadika, there is the "flower heart" of the city — Louloudadika. It is an inherent part of the history of the Northern capital, a traditional corner where a variety of smells, images and feelings combine in a magic way. Located in close proximity to the Modiano market and the Jewish baths of Yahudi Hamam, the area is still attractive to both visitors and residents of Thessaloniki.

Very close to the port, on Komninon street you will find a pedestrian zone that reaches the intersection with Vasileos Irakliou street. The small cobbled street of Komninon is quite narrow — only one car can drive along it. That is why you can rarely see cars here — the street cafes and flower shops took almost all the space and left room only for pedestrians. On one side, it is framed by the walls of the old Jewish baths, which are called Yahudi Hamam or Pazar Hamam — a Jewish quarter was located here for a long time. The abundant trees foliage provides good shade for almost the entire Komninon street, where the oldest flower shops in the city are located. This place is called Louloudadika (translated from Greek "λουλουδι" means "flower"). This name is used much more often than the real name of this street.

Even if you do not plan to purchase beautiful plants, a walk through this area will bring you unforgettable pleasure. Delicate floral aromas in the air are mingled with fantastic flavours of the Greek coffee, which is served in all the surrounding cafes — it is enough just to sit down and drink a cup of invigorating drink, enjoying the historical and architectural sights.

Louloudadika district got its name in the 50ies of the last century — the flower shops that were attracting buyers from all over the city were located in this area. The first flower shops began to appear here as far as in 1936, and in the 1950s, the Association of Florists managed to reach an agreement with the Prime Minister of Northern Greece, which allowed to place outlets here. At the intersection of Komninon and Vasileos Irakliou streets, 11 small shops were opened. They saturated the air with magnificent floral aromas and quickly earned the title of the largest flower market of Thessaloniki.

However, as the time passed, some shops were forced to close. One of the reasons was the emerging of large shopping centers and big markets, which have been gradually replacing the need for small outlets. The crisis and high tax charges also had a negative impact on the existence of the flower business — only 5 of the 11 stores that occupied an area of 200 sq. m., remained, having taken the area of 120 sq. m. In addition, the Office of Byzantine antiquities also invaded the already difficult life of florists — the close proximity to the important historical monument of Yahudi Hamam was the reason to deprive the flower shop owners of trading area in this district. However, with the help of the Prime Minister, they managed to reserve their rights.

Most flower shop owners have run a family business in this district since the time of its beginning. The sellers tell that the period from 1965 to 1985 was the real peak of their prosperity — in those days people took flowers not only for dates, but also paying a visit and going for important meetings — they were exchanging bouquets for various reasons. When the opportunity to send greetings on the Internet appeared, the popularity of fresh flowers has extremely declined.

In the 90s, during the period of restoration of the historical center of Thessaloniki, the works on the reconstruction and renovation of Komninon street were carried out. It was then when the Office of Byzantine antiquities adopted a decision to restore the monument and clean up the area around it. Then the shop owners managed to escape the disappearance of Louloudadika, but the flower shops were moved to the opposite side from the baths.

Opposite the flower shops, it is impossible to miss the unusual old building — it is Yahudi Hamam, Pazar Hamam or Jewish baths. The building was erected in the XVI century and is well preserved till these days, providing an opportunity for everyone to see what the baths looked like in those days. The entire area of Yahudi Hamam was as much as 750 sq. m. The building was divided into two parts — male and female, which looked like square halls with hemispherical arches. Besides, there were additional rooms, as well as a water tank. Yahudi Hamam is built of brick and stone resembling the Byzantine style of masonwork. The baths had stopped working in 1912, and later the building was damaged in a fire in 1917. Nowadays it is planned to restore the interior of Yahudi Hamam.