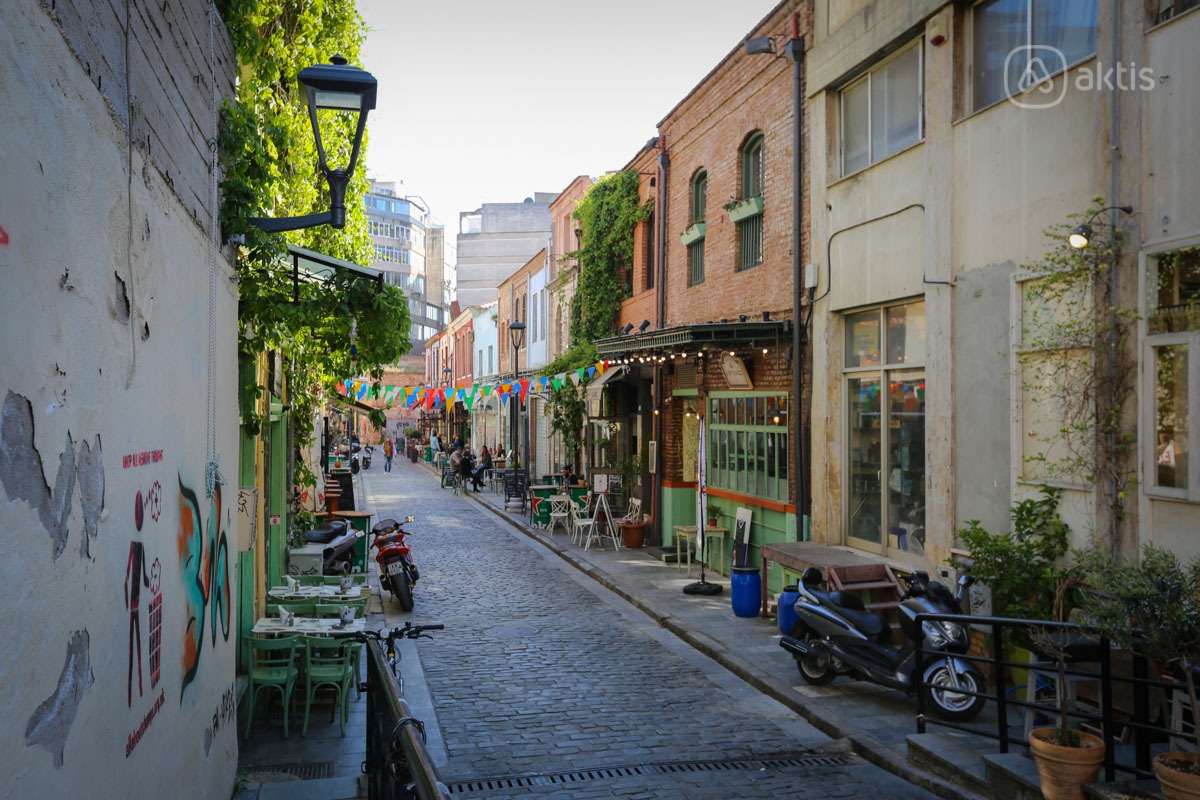 Ladadika is one of the oldest and the most vivid districts of Thessaloniki, which is incredibly popular not only among locals but also among city visitors. A pedestrianised area with great number of different small restaurants, cafes, taverns and clubs efficiently combines the genius of antiquity and the rhythm of modern time.

A quarter of restaurants with a truly Greek atmosphere

Ladadika is one of the very few places, which almost were not touched by Great Fire in 1917, when the fire destroyed the major part of Thessaloniki. For this very reason a walk in Ladadika is a chance to immerse in the atmosphere of past and to feel the terrific charm and mysteriousness of one of the oldest districts of Thessaloniki city.

The name of the district comes from the Greek word “ladi” which means “oil”. It appeared due to a great number of warehouses and wholesale stores, which were selling olive oil. During several centuries Ladadika was ranking among the most important commercial centers. During the Ottoman occupation there were a Central market and a City trade area here. Many shops were selling Egyptian goods — things made from porcelain, linen, sugar, rice, coffee. For this fact the locals called it “Egyptian market”.

The middle of the XIX century brought to Ladadika the appearance of shipping and commercial companies, the enlargement of trade list, some time later banks, modern shops and office units started working. During the period between the Great Fire of 1917 and the earthquake of 1978 the relevance of the district gradually began to decline and some time later only oil sellers left here. By the end of the 70’s the territory was absolutely abandoned. New popularity came to Ladadika at the end of 1980’s, when the Ministry of Culture of Greece declared this place to be a protected cultural monument.

Places of interest inside

Various taverns, cafes, bars and restaurants had taken their place in renovated abandoned buildings, attracting more and more curious visitors there. Nowadays Ladadika is a culture and entertainment district, which livens up and fills with all kinds of colors at the end of the day. While walking in the midday in the cozy cobbled streets and looking over colorful two-storeyed buildings with large rectangular windows, you can feel an extremely alluring mixture of ancient times and modern life. At this time of day the air is full of aromatic smells of coffee and unique Greek dishes — this is the most comfortable place to have lunch in a relaxed atmosphere.

And in the evening the streets are lit with romantic yellow light, and loud music sounds from everywhere — bars, restaurants and clubs turn into a meeting place for young people, locals and of course, for the guests of the city.

This historical district of Thessaloniki is divided into two parts:

Today instead of warehouses, shops and brothels the streets of Ladadika are full of all kinds of taverns, cafes, small restaurants, coffee houses, espresso bars and different popular nightclubs.

It is a pedestrianized city area, where the air is full of surpassing smells of delicious Greek cuisine dishes — here you can find a place for any taste and budget.

Ladadika is located in the central part of the city — not far from the port, just five minutes walk from the Aristotle Square.

Ladadika is popular as an area where you can not only relax and have great fun but also have an excellent lunch that is why cafe and restaurants all around here are never empty. Therefore, if you want to get exactly to your favourite restaurant, try to order a table in advance — most of the restaurants of the area have their own websites where you can book a table online.

Ladadika is worth visiting for tasting traditional Greek delicacies without which you won’t get a complete idea about this amazing and multifarious country. Vegetable and lamb “moussaka”, rich bean soup “fasolada”, fragrant cutlets “soutzoukakia”, various salads — the main idea of Greek cuisine is health benefit and diversity. Even fast food is extremely delicious here: “souvlaki” — small skewers of chicken or pork kebabs, “gyros” — pork with French fries in pita seasoned with savoury spices, tender puff pastry buns with different fillers. And for dessert you definitely should try “Trigona” cakes, which are triangular cups of dough soaked with syrup with a buttercream filler, or small doughnuts “loukoumades” with honey, cinnamon and grated nuts.