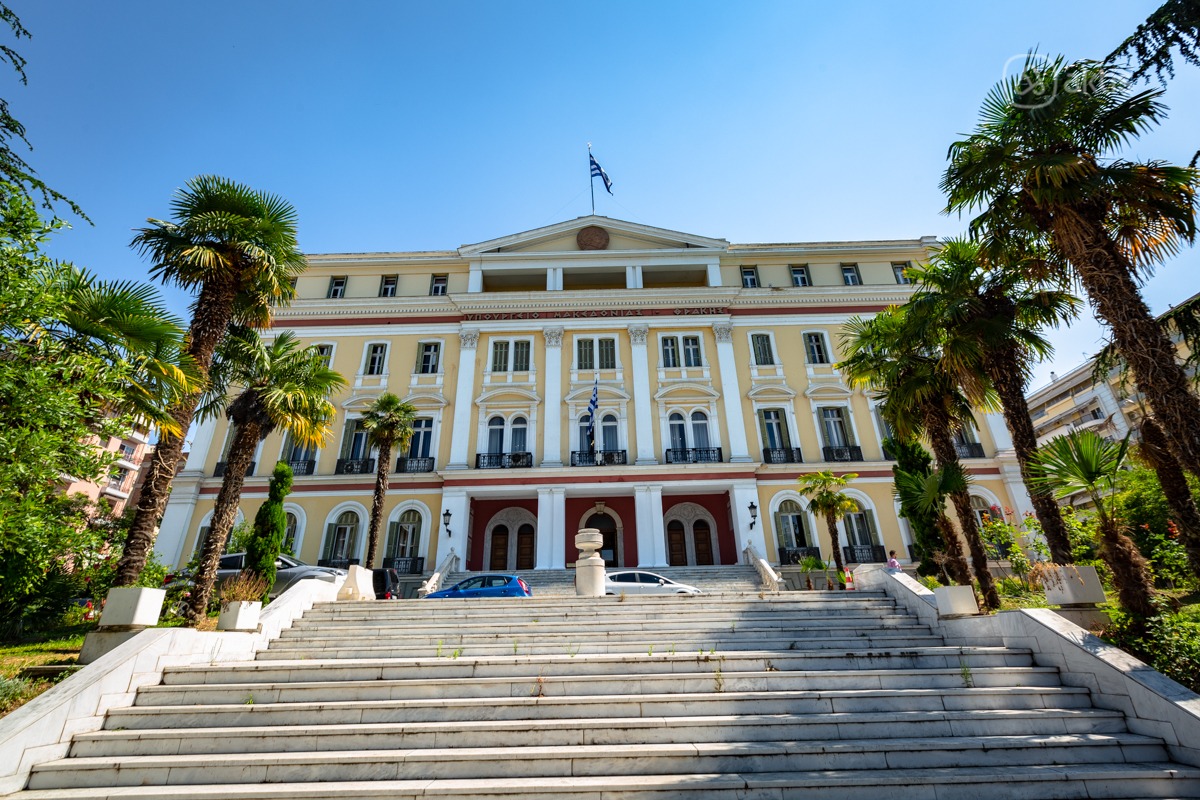 The Ministry of Macedonia and Thrace is an administrative institution in the center of Thessaloniki, where the seat of the Ministry of Macedonia–Thrace and other government services are located. It was built in 1891 by the famous Italian architect Vitaliano Poselli, who designed many public, religious and private buildings in the city.

A couple of historical facts

The government house, also called Konak or Diikitirio, appeared in Thessaloniki during the rule of the Ottoman Empire. It was originally the residence of the Governor General of the city and of the Turkish district commissioner. Since 1907, the building had housed the Ottoman law faculty, and in 1911, Sultan Mehmed V Reshad stayed there to live.

In 1912, during the First Balkan war, it was in the residence where the documents on the surrender of the city were signed. Thus, Thessaloniki became a part of the Kingdom of Greece

The Ministry of Macedonia and Thrace appeared officially on the map of Thessaloniki on 19 August 1988. Moreover, 20 years later it was degraded to the general secretariat. In 2009, the prime minister of that time Georgios Papandreou actually abolished the structure — there were plainly no decent people who could lead it. It was from this moment that the General secretariat for Macedonia and Thrace affairs began functioning. After the "New Democracy", which had been led by Antonis Samaras, had come to power on 21 June 2012, the ministry was restored, and in 2015 reorganized into the Ministry of Interior.

About the building of the Ministry

Anyone can notice even by the unaided eye that the facade of the fourth floor is slightly different from the rest of the building. This is not nearly an accident. The fact is that initially the building was three-storeyed and was built with elements of classicism and renaissance. It was not hurt even by the great fire of 1917. But in 1955, Ernest Hebrard, as the city's chief architect, decided to complete the building with a fourth floor with obvious neoclassical features. For example, the windows here are distinguished by straightness, as well as by the absence of arched and frame structures. And the columns are made with fewer decorative elements — they are more smooth and strict.

Functions of the Ministry nowadays

Diikitirio includes 16 administrations, a secretariat and 5 departments. According to the official website of Diikitirio, today the Ministry of Macedonia and Thrace is responsible for "the development of the boundary regions of the country, which gives Northern Greece the opportunity to get a vote and role in political and economic processes". The structure collects information about the communities under its jurisdiction, and participates in discussions of legislation and policy with other government bodies.

Understanding the existing responsibility for the development of regions and recognizing the need for creative functioning of all state bodies, the Ministry was the first to create a stable background for attracting new investments. And this therefore increases the inflow of capital and creates new jobs.

Since the Ministry is located in the heart of Thessaloniki, it is very easy to be found, even just walking along the streets. Diikitirio is a 10-minute walk from the Archaeological Museum and the Basilica of St. Demetrios. You can also use the bus No.50, which runs every hour and allows a study tour around Thessaloniki.