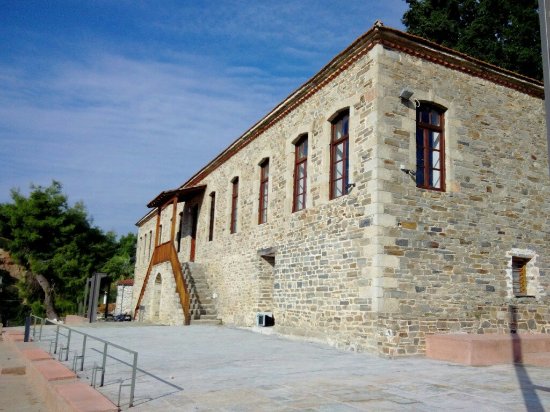 The Church of Agios Nikitas (Greece) sits within a beautiful environment of Nikiti on the Halkidiki Peninsula. Its establishment dates back to the second half of the XIX century. At present, it is one of the oldest pilgrimage sites in the region. The life of the church and the settlement are closely connected to each other and the joy, and tragedies of its residents.

The establishment of Agios Nikitas Church took place at the times when both Nikiti and Greece were flourishing. The settlement was established in the XIV century. The religious site was built only a few centuries later, in the XIX century.

The decision about the construction of the church caused a variety of opinions among the residents of Nikiti. It was due to the place of the building construction. Each of the inhabitants wanted to live closer to the religious center of the settlement.

As a result, they chose a special place. It was a fortress, used by the Turkish soldiers for quartering in the village in the past. It is worth to mention that before, there were no other religious sites here. Later, the residents of Nikiti destroyed the fortress. In 1867, they established the Church of Agios Nikitas in its place.

The site got its name thanks to the inhabitants of Nikiti. They chose the name by giving their preference to the name of the patron saint of the village.

During the Civil War in Greece, Nikiti served as a ground for the partisan battalion camp. Soldiers controlled the entry to the Sithonia peninsula. In October 1948, two residents of Nikiti were blocked inside the church in the course of a battle. Considering that soldiers would not try to enter the building, they started to shoot the partisan positions. The partisans, in their turn, found a way to the church and set a fire.

Since most of the church was made of wood, the fire destroyed it. Only the stone wall and the depiction of Saint Nikitas were preserved by the miracle.

The residents of Nikiti wept for their destroyed church. During a short record period, from 1948 to 1950, they managed to renovate the religious site and its glory. In recent years, people also built a new atrium and stairway.

After the establishment, the Church of Agios Nikitas has become the center of the public life of the village. The size and the magnificence of the church reflected the village’s prosperity. People in Nikiti usually started all the celebrations from a church service. There is still a strong connection between public and religious life in Greece.

The brightest and most significant celebration in Nikiti is the day of Saint Nikitas. It takes place on September 15. Thousands of pilgrims from all over Halkidiki annually joined the festive event. It usually began with a visit to a church. After that, the residents of Nikiti continued the festive event by banqueting at the square. The Nikiti residents also arranged a huge market, offering a rich choice of sweets, souvenirs, and gifts. At present, the significance of a celebration significantly decreased, but people try to bring the old traditions back.

Agios Nikitas Church sits within the area of Sithonia, on the Halkidiki second “finger”. The territory housing the church provides fantastic views of the sea and Kassandra. Within a lower area, there is the Historical and Folklore Museum of Nikiti. The higher territory is the cemetery.

The landmark stands within the territory of Nikiti Old Town. You should follow in the northeast direction from the marine terminal to find it. A trip by car from the promenade will take no longer than 10 minutes. A walk at a leisurely pace will take you about 40 minutes. The building of the church will sit on your right.