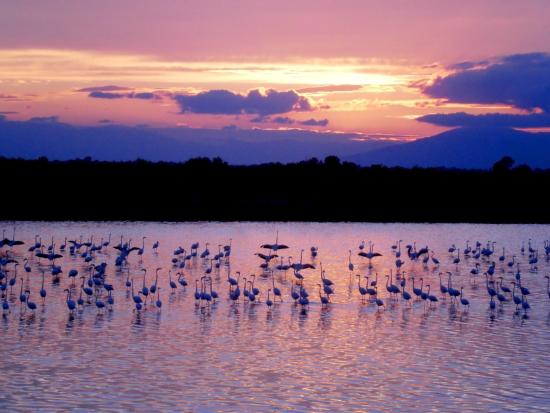 One of the most important ecosystems in Greece is situated on the west coast of the Thermaikos Gulf. It comprises the area of Kalochori Lagoon, the estuary of the Gallikos River, the delta of the Aliakmon, Loudias, and Axios rivers, the wetland of Nea Agathoupoli and Aliki Kitrous. All these treasures of the Greek nature were united into one National Park, where you can spend a day far from civilization.

In ancient times, the territory of Axios Delta looked completely different from the way we see it now. The time and human activity were changing this place throughout the centuries. Axios Delta National Park was established in 2009 and covers the area of almost 34 hectares. The territory of the natural reserve was taken under protection after joining the Ramsar Convention and the regional network Natura 2000. There are about 300 bird species within the area of the National Park (including the extinct ones), 40 species of mammals, amphibians, and crawlers. Among numerous inhabitants of “Axios Delta”, you can see:

The delta maintains not only the bird population of Greece but also provides the necessary fish spawning run conditions in the Aegean Sea and the Thermaikos Gulf.

Kalochori Lagoon – it is the northern gates of the National park. You can find it 8 kilometers from Thessaloniki that is why one pays great attention to the state of local ecology. The flamingo and other Axios Delta birds are living in the waters of the lagoon. The shallow waters are the source of their nutrition.

The Gallikos River was brought to life in the direct meaning of the word, thanks to the Aliakmon River water supplies. One provides favorable living conditions for cormorants and rare species of herons.

The Axios River – is the second-longest river in the Balkans. The river has its source on the territory of the Republic of North Macedonia and discharges into the Thermaikos Gulf. The river is an important source of fresh water. The grey herons, ibises, and one of the biggest cormorant colonies in Europe choose local riverine forests to be their home in the spring and summer.

Loudias River was once a water flow, created by the mountainous rivers, running through Giannitsa Lake and discharging into the Thermaikos Gulf. The modern Loudias River is a flume that was officially opened in the 30s.

The Aliakmon River – is the longest river in Greece with the expanded delta. Thanks to the limited presence of people here, this area is inhabited by many species of animals. Among them are the white-tailed eagles, which belong to rare species in Greece.

The Axios Delta National Park territory is a remarkably beautiful place, where you can spend a day alone with nature. You can find various hiking and cycling tours on the official website of the park. You should look through all the available options beforehand to choose the best way for relaxation here.

The Chalastra Information center (Eirinis Street) provides a diverse choice of materials, maps, and routes for travelers. You can also find interactive panels offering various applications, photographic materials, and documentary movies. The center works every day (except Sunday), from 10:00 to 15:00.

Here are some of the routes about “Axios Delta”:

You should better reach the Axios Delta National park using the rental vehicle as this reservation area is situated pretty far from the city. You will have to leave the vehicle in the parking area to continue the walk along the selected route. If you are going to travel by bus, you can use this mode of transport only for reaching the starting points of the travel route at Kalochori (the city bus №40 leaves from the railway station in Thessaloniki) or Nea Agathoupoli (from the bus stop in Thessaloniki and Katerini), where you can start a walk about the National park.